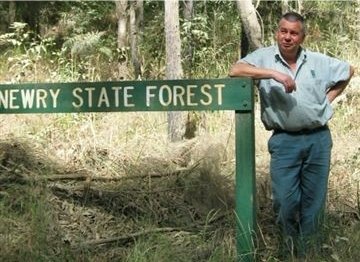 Vic is a first generation Australian, born of Lithuanian Australian parents. His mother was deported to a forced labour camp after Hitler’s invasion of Lithuania in 1941, and his father escaped Stalin’s invasion in 1944. After the war, they were each recruited by Australian immigration officials in occupied Germany, and eventually met and married in Sydney. Vytautas was employed on the Snowy Scheme, and Vic was born in Cooma in 1955. He lived his first few years at Eaglehawk Neck, in the construction camp for what is now known as Eucumbene Dam. He gained a Degree as Bachelor of Science (Forestry) from ANU and was awarded the (British) Commonwealth Forestry Book Prize for academic achievement.

Vic worked for NSW Forestry Commission as a labourer before being appointed as a professional forester in 1978. He worked in all types of native forests and woodlands across NSW and was a member of local bushfire brigades, before being transferred to Eden to run the Forestry Commission’s Regional Ecological Research Centre. After a stint as Regional Planning Manager, he became Silviculturist for the Commission’s Native Forest Division, across the State.

Vic received a Fellowship from the Joseph William Gottstein Memorial Trust and a Max Jacobs Award from Australian Academy of Science to investigate eucalypt decline across Australia. He has published many papers in scientific journals, presented papers at international conferences in Australia, New Zealand, Mexico and the United States and co-authored papers to several other international conferences. Vic has given independent evidence at numerous parliamentary inquiries into land and fire management.

He has published two books and is currently working on his third – Siberia to Eden: a family world history.