Oliver Hartwich is the Executive Director of The New Zealand Initiative, a public policy think tank in Wellington, New Zealand.

From October 2008 until April 2012 he was a Research Fellow in the Economics Program of the Centre for Independent Studies in Sydney, Australia.

Previously he worked for think tanks in Britain (Policy Exchange and the International Policy Network), and I was the UK representative for the German Institute for Free Enterprise. For a brief time he also worked as an adviser to Lord Oakeshott of Seagrove Bay in the House of Lords.

He is a member of the Mont Pelerin Society and the Foreign Correspondents’ Association (Australia and South Pacific). 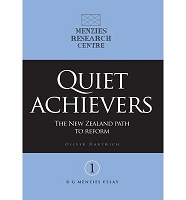