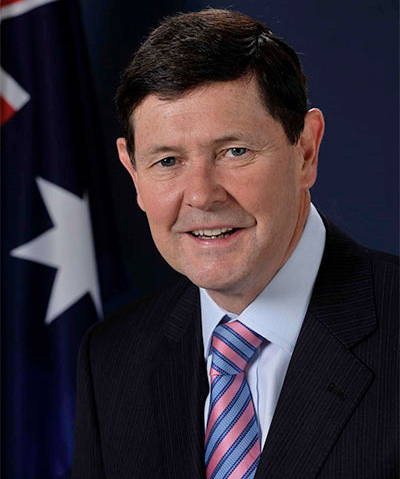 The Hon. Kevin Andrews MP has been a member of the Australian Commonwealth Parliament, since 1991, serving as the member for the Victorian seat of Menzies in the House of Representatives.

Mr Andrews is the author of Maybe I Do: Modern Marriage and the Pursuit of Happiness (2012) and Joseph Lyons and the Management of Adversity (2016).

Raised in country Victoria, Mr Andrews studied Law and Arts at Melbourne University, where he lived at Newman College, before completing a Master of Laws at Monash University.

Before his election to parliament, Mr Andrews served as an Associate to Sir James Gobbo in the Victorian Supreme Court before practicing law at the Victorian Bar. He was named Australian Young Lawyer of the Year for his community work in establishing a legal scheme for disaster victims, and for publishing a book for seniors about the law.

A keen cyclist, Mr Andrews is married to Margaret and together they have five adult children.

GREAT RIVALRIES: Cycling and the Story of Italy -- Kevin Andrews
Your Price: $29.95

Joseph Lyons and the management of adversity
Your Price: $19.95

Maybe 'I do': modern marriage and the pursuit of happiness (concise edition)
Your Price: $29.95
Quick View