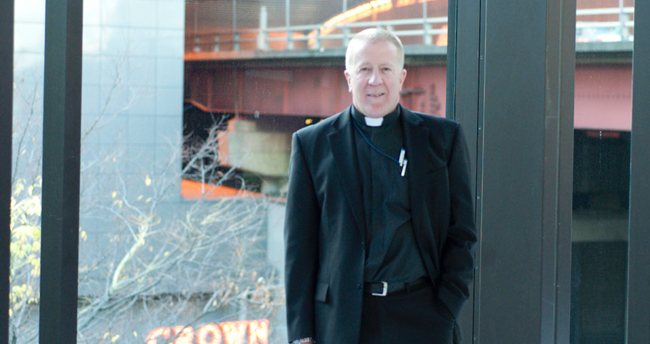 Born in Adelaide, and schooled in Essendon, Victoria.  Fr James joined the Commonwealth Police in 1977 with an initial posting in Canberra. He has qualified as a martial arts instructor in Brazilian Jiu Jitsu, scuba diving and played first grade cricket for Northcote.

Fr James undertook theological studies at Melbourne University, graduating in 1984. Appointed to the UK as an associate priest, He became one of London’s first white vicars to minister to the expanding West Indian community Fr James initiated his first interfaith gatherings in west London following the Brixton riots, after which he was appointed on short term placement to Berlin (west Germany) in 1988 and Budapest in 1989.

Fr James returned to Australia in 1989 where he was Senior Chaplain at Geelong Grammar School for seven years, followed by two years at St Michael’s grammar and six years at The Peninsula School.  He was noted for his pastoral care with a focus on martial arts, football and cricket as methods for building confidence in students.

In 2004 he was appointed a parish priest at St Stephens Richmond , then in 2005 Melbourne’s first team vicar for the new parish of Jika Jika in Melbourne’s north with responsibility for a large Sudanese refugee community.  As Parish priest for the Preston area, he was a strong advocate for the Nuba people, of Sudan, who are experiencing genocide.  He has built two schools in Northern India.

Fr James founded Chaplains Without Borders in 2004 to initiate new ventures into corporate and community organisations, and CWB grew to be Australia’s largest chaplaincy service within 2 years. He went on to be appointed as the world’s first chaplain to the casino industry in 2006 (Crown Enterprises Australia) a position he still retains.

As a leading traditionalist within the Australian church, Fr James supported the development to the Anglican Ordinariate in Australia and served on the national committee as secretary 2010-2011.  Fr James was received into the Catholic Church and ordained as a Catholic Priest in September 2012 as a foundational priest for the Australian Ordinariate. In 2012 he was appointed National director for Ordinariate schools and to the Ordinariate governing council.

Fr James has continued to develop missions including Catholics in Business 2012 and Catholics in Mission and renewal in 2013. His CYA (Catholic Youth Academy) youth program works through Crown casino to develop confidence in de-motivated young Australians and find work placements within Crown.  In 2013 he co-established the Renewal Centre.

He is the first Chaplain appointed to an A league soccer club in Australia at the largest Australian club, Melbourne Victory. He is involved with 9MM and 45ACP pistol competition and is completing PPL training for Helicopters

Let There Be Light: Parish Leadership for the 21st Century -- Fr James Grant
Your Price: $22.95 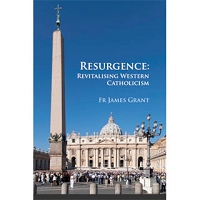