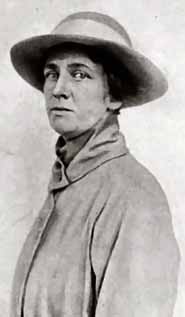 In a letter to her mother from Tarsus, dated April 15, 1909, Helen Davenport Gibbons wrote, “They (the Armenians) are terror-stricken, and have reason to be. How would you like to live in a country where you knew your Government not only would not protect you, but would periodically incite your neighbors to rob and kill you with the help of the army?” She made known the facts of the massacres that she herself witnessed in Tarsus and Adana in a book entitled, The Red Rugs of Tarsus, a series of letters in which she chronicled her and her husband’s (Herbert Adams Gibbons) first hand experiences. The book was written in 1917 and the following year was translated into French under the title, Les Turcs Ont Passé; Par La! Journal D’une Americaine Pendant Les Massacres D’Armenie.

“Technically speaking, we were not missionaries. We went to Tarsus at the invitation of Dr. Thomas Davidson Christie, the President of the College2 there, to spend a year rendering what service we could to the regularly appointed missionaries; therefore I am at liberty to express, as I did above, my admiration for the American missionaries from a purely impartial standpoint.”3 states the author.

Shortly after her marriage to Herbert Adams Gibbons in June 1908 at the age of 25, she traveled with her husband to Turkey where he was working on his doctoral thesis, teaching and also writing as a foreign correspondent for the New York Herald.4 [In 1916 Herbert published The Blackest Page of Modern History: Events in Armenia in 1915 – The Facts and Responsibilities.]

Following the birth of her first child, Christine Este, she left Tarsus for Egypt in May 1909, and eventually remained in France during the war years, where she founded the organization known as “Sauvons Les Bebes, which is credited with having saved 5000 war orphans. Later she became a lecturer representing the Young Men’s Christian Association with the American Expeditionary Forces. She was the correspondent of the Century Magazine at the 1919 Peace Conference.

Helen Davenport Gibbons also contributed articles to the Century and Harper’s magazines and to the Pictorial Review. In addition she authored A Little Grey Home in France in (1918), Paris Vistas (1919) and Four Little Pilgrims (1926), which were all published by the Century Company of New York. She was educated at Bryn Mawr (Pennsylvania) and Simmons (Boston) colleges and traveled extensively in the United States on behalf of American schools in the Near East. She died in Princeton, New Jersey on September 1, 1960.