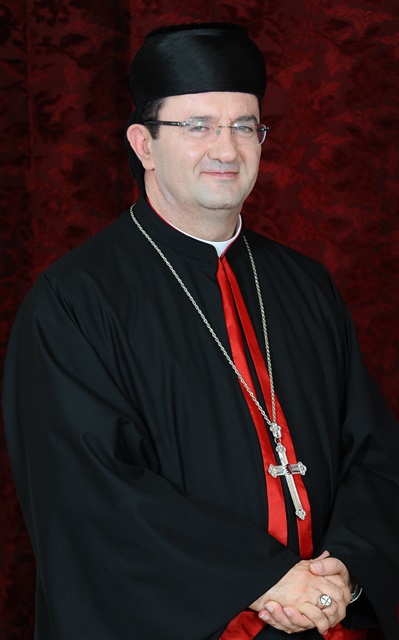 Bishop Antoine-Charbel Tarabay was born in 1967 in the village of Tannourine, situated in the mountains of Northern Lebanon. Antoine Tarabay joined the novitiate of the Lebanese Maronite Order at the Monastery of Kfifane, Lebanon in 1983 professing his first vows in 1985 and his perpetual vows as Monk of the Lebanese Maronite Order in 1991. In 1993, he was ordained to the priesthood.

After completing his undergraduate studies in 1993 majoring in Theology at the Holy Spirit University in Kaslik, Lebanon, Bishop Tarabay moved to Italy to complete two Master’s Degrees where he graduated with Honours - Moral Theology (1996) and Bioethics (1998). He also completed a Diploma in Human Rights Studies (1999) at the Institute of Human Rights in the Catholic University of Lyon, France, before returning to Rome to finish his Doctorate Degree. In 1999, Bishop Tarabay was awarded a Doctorate of Moral Theology (Bioethics), from Accademia Alfonsiana - Lateran University.

In 2007, he was appointed Rector of St Charbel’s College, Monastery and Church. He served in this capacity until his appointment as Maronite Bishop of Australia by Pope Francis on the 17th of April 2013 following the retirement of Bishop Ad Abikaram. He was ordained to the Episcopate on the 25th of May 2013 by His Eminence and Beatitude Mar Bechara Boutros Cardinal Rai at the Maronite Patriarchate in Bkerke. Bishop Tarabay was officially installed as the 4th Bishop of the Maronite Diocese of Australia on the 3rd of June 2013 at St Maroun’s Cathedral in Redfern.

Bishop Tarabay has published a book, Bioethics at the Crossroad of Religions, along with several articles and contributions to books and publications about the Maronite Church and Catholic Bioethics.

Bioethics at the Crossroad of Religions - Antoine Tarabay
Your Price: $29.95
Quick View